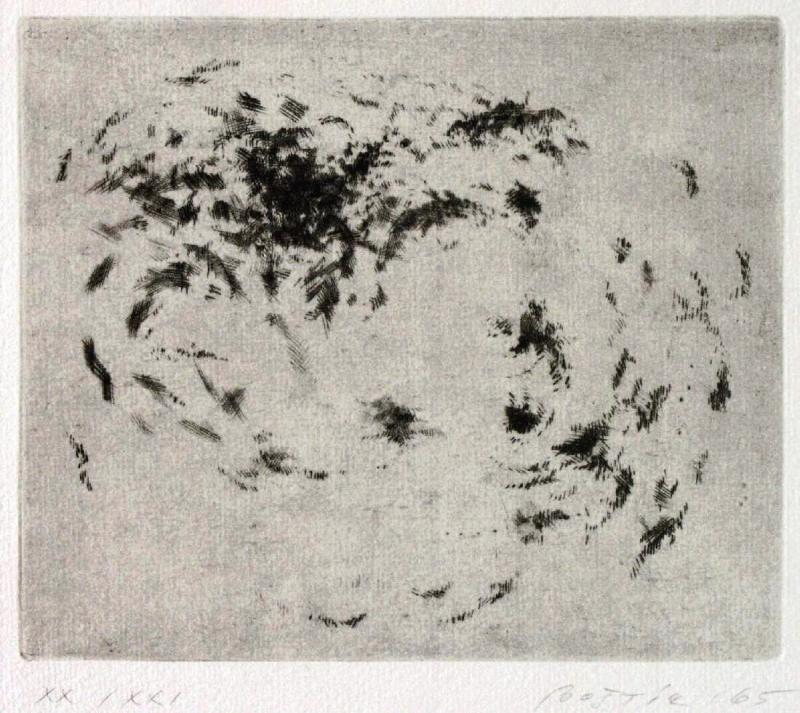 in exposition
From the collections
Masaryk Square No. 24
Jihlava

Boštík's subtle graphics from the 1960s characteristically speak with minimal means of expression. His lifelong interest in the space beyond what is seen and the material led him to a thoughtful examination of the initial impulses, the elementary forms of world formation.

Boštík's subtle graphics from the 1960s characteristically speak with minimal means of expression. His lifelong interest in the space beyond what is seen and the material led him to a thoughtful examination of the initial impulses, the elementary forms of world formation. He approached art in a similar way, meditating meditatively on the empty surface of the painting and examining the laws that lead to its formation. Fascination with primary freedom of choice and subsequent search for order in the created structure of the image. He left the depiction in question and focused fully on depicting the intangible nature of the world. The empty area of ​​the painting became his intangible field, where the lines of invisible forces cast a spell radiating a kind of ethereality. This process is very visible in the graphics we now have before our eyes. The tufts of black dots cluster according to some mysterious order, perhaps the magnetic forces hidden behind the paper. Variants of a similar structure Boštík created in whole cycles, searching in the infinite possibilities of the given structure. He tried to depersonalize the whole process of creation, to remove expressive distortions and subjective abuse of painting. Like his companion, the Estonian composer Arvo Pärt, he worked with minimal means of expression. In music, it is a structure of several tones and spaces of silence, in the image it is a play of a selected color, shape and white area of ​​paper or canvas. Boštík was never interested in current art trends, but he searched with independent thinking. Camile Corot, for example, approached him from his predecessors, and Josef Šíma from his contemporaries, but he sought inspiration mainly in Romanesque and early Gothic art. Not in his particular way of grasping the painting, but rather in his quest to depict the spiritual essence. As he himself says: “It seems to me, looking back, that I have been moving towards something like archaic art all my life - permeated with brightness and exciting simplicity. Unlike primitive efforts, it not only wanted to capture what was seen, but also to explain the image and meaning of the world, human life in a mysterious universe. … I would say that I am looking for a lost paradise, an exit from the labyrinth in which we live. I try to find simple and clean relationships in the complexity of today's life. And I do so with my head, a brush of paint and a canvas. "

Boštík first devoted himself to drawing, in the 1940s also to sculpture and textile design. Together with J. John, he created a memorial to the victims of Nazism in the Pinkas Synagogue in Prague in 1955-59. The initial landscape painting was influenced by the work of Camillo Corot and Paul Cézanne, but with a greater emphasis on drama and expressiveness. Later knowledge of archaic artistic principles led to a turn to considerable simplification of form in basic geometric figures (Kvádr, 1941; Krychle, 1941). The symbolic depiction of skulls from the period 1953-58 goes through pictorial statements using signs (Atomic Age, 1957; Spider, 1957) to the rejection of reality and arriving at a position of markedly lyrical abstraction at the very end of the 1950s. The themes of "fields" from the 60's and 70's are only an external feature for capturing the color and shape composition of a certain order (Shaping Field, 1965; Wrinkling, 1967; Field, 1971; Grooving Green and Purple, 1974; Great Grooving, 1978) . This also applies to parallel paintings, the themes of which are based on older works, from elementary geometric shapes (Space in a Circle, 1967; Spiral, 1967). This direction is developed by the artist in the next period, which can be described as the top. He then focuses on visions of a perfectly harmonious cosmos and the world (Počátek, 1986; Nebula, 1988).

(the medallion was created using the New Encyclopedia of Czech Fine Arts, Prague 1995)